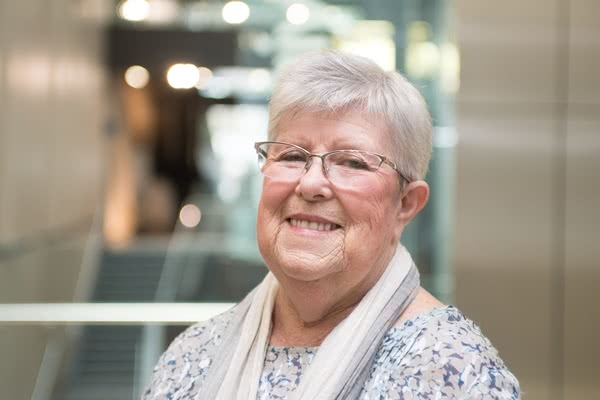 When Carolyn Young was first diagnosed with breast cancer she thought it was only an inverted nipple. The 71-year-old retiree and grandmother of three was referred to Lifehouse after a biopsy confirmed breast cancer.

Carolyn was put on a clinical trial for patients with metastatic breast cancer that expresses HER2 (the human epidermal growth factor receptor). This condition is conventionally treated with chemotherapy and trastuzumab, a drug which targets HER2. The trial is of an additional drug, pertuzumab which also targets HER2. The results show a better response to the whole treatment, disease-free survival and increased overall survival rates.

Carolyn has just had her 52nd treatment on the trial, she’s been on it for three years. She has responded well to the treatment. “When I started I had a weeping wound but this has dried up”, she says.

“I will never be cured of cancer but the trial drug allows me to have a good life.”

She takes advantage of the complementary therapies on offer at Lifehouse including lymphoedema massage and acupuncture for numbness in her feet and fingers after chemotherapy.

Carolyn will be on the trial as long as it continues to help her, it is now being funded by the Government.

Her family and friends have been a huge support throughout the treatment. She has them on a roster, each taking turns to bring her for scans and treatment. Carolyn brings lunch and the wait with her and have a chat and catch up on the world’s happenings.

She says: “The hardest part of my diagnosis was explaining to my granddaughters that I would lose my hair. I didn’t want to tell them at first but they are not stupid, they would have noticed that I couldn’t come to things like I used to. They knew I had always wanted to have blue hair so together we’re hoping that it might grow back like that.”

Carolyn is happy that she was referred to Lifehouse. “I have a terrible fear of hospitals”, she says, “but to me Lifehouse isn’t a hospital. It doesn’t look or smell like one. It’s so light and everyone is so friendly.”

Our 2019 Ladies Lunch was certainly bigger, better and pinker, raising an incredible $132,000!