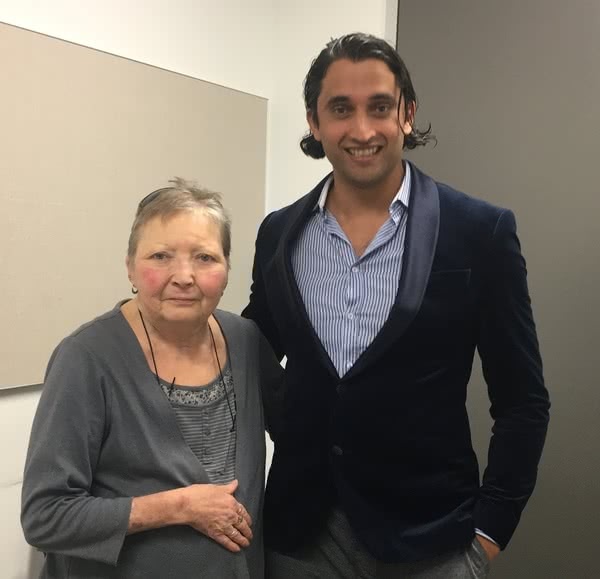 Performed by surgeon Associate Professor Sanjay Warrier and anaesthetist Dr Ryan Downey, the procedure took a little under an hour and saw Moray up and about within days, rather than weeks, after her surgery.

As a double lung transplant recipient, Moray wouldn’t have been eligible for a surgery that usually requires general anaesthetic. When a routine breast scan found a ductal carcinoma in situ in her right breast, Moray had to make a decision.

A/Prof Warrier and Dr Downey spent a year planning the surgery, drawing on research from other cases across the world.

“We had to think outside the box. How could we actually achieve what we wanted to, which was to remove the pre-cancer away, and still keep her alive?” says A/Prof Warrier.

Today, Moray is recovering well, and grateful for the team, who she says was ‘magnificent’.

While not recommended for everyone, the procedure opens doors for those who aren’t currently eligible for life-saving surgery. “It’s nice to know that we can now do this procedure safely and with comfort for other patients like Moray,” says Dr Downey.

Head of Department, Dr Cindy Mak says, "Being able to perform mastectomy under local anaesthetic allows us to treat patients who would not be fit for a general anaesthetic. It’s not for everyone, but this is a very useful technique!"

For someone who was awake on the operating table, Moray Gallacher was remarkably relaxed during her mastectomy.

“It needed to be done. There was no need to be nervous about it,” she said later. “I knew it was going to be OK.”

Due to another medical condition, Moray had a double lung transplant in 2003. When she was diagnosed with pre-cancerous ductal carcinoma in situ two years ago, doctors were concerned that placing Moray under general anaesthetic would be too risky. Surgeon Sanjay Warrier and anaesthetist Ryan Downey spent a year planning how to perform a mastectomy with the patient fully conscious using local anaesthetic – the first time such a procedure has been done in Australia.

“I didn’t realise what a big deal it was until people started making it a big deal,” Moray said. “I went to my GP and she asked, ‘can I have your autograph?’”

For her part, Moray spent most of the procedure watching a home renovation show on Dr Downey’s phone.

“That was the only decent thing on,” she recalled, adding that she wasn’t sure of the etiquette for an awake surgery. “What do I do? Do I try to make witty conversation?... They were just doing their job.”

Moray is a firm believer in the power of positive thinking so she tried not to let herself feel overly stressed. It helped that A/Prof Warier, Dr Downey and the team explained every part of the procedure to her.

“I felt very relaxed with A/Prof Warrier and Dr Downey… A/Prof Warrier was very straightforward about what was going to happen,” she said. “They worked very well together. They were on the same page every step of the way.”

Moray wasn’t the only one comforted by their expertise and bedside manner.

“My mum was very stressed out because she’s had both her breasts removed,” Moray said. “However, once she had the chance to speak with them, she felt much more confident.”

Post-surgery, Moray is recovering well, and said she felt little pain after the procedure.

2022 - What a wonderful year for the Sydney Breast Cancer Foundation