A water buffalo on King and other cancer stories2 May 2017 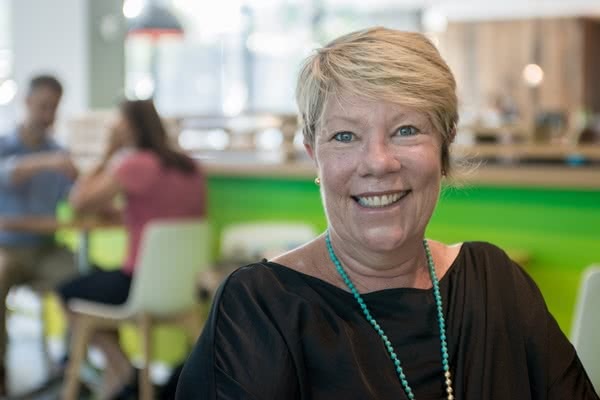 The 54-year-old had biopsies of these lumps in the past which always came back negative. Then one day she found a lump, and as soon as she felt it she had a surge of emotion and started crying. “I couldn’t explain my reaction. The lump felt like gristle,” she said.

She went to the doctor and had a mammogram and a core biopsy taken.

Catherine is the Head of Creative and Performing Arts at a girls’ school in Sydney where she works on arts engagement projects to provide opportunities for art students across New South Wales. She was sitting in an executive team meeting when the call came from the doctor asking her to come in to the medical centre, that day. She was told she had invasive ductal carcinoma. She recalls:

“That’s when I was picked up and flung on the rollercoaster. I knew it was going to be a long haul. I knew I had the energy and resources in me to get me through but I knew it would come at a huge cost. And it has.”

Catherine is a very social and outgoing person but she expected that she may lose a few people on this ride. “A lot in my life was energy out; I needed energy in.” At the same time, some people really stepped up. “One of my girlfriends would meet me for coffee every Friday and on the days when I wasn’t well enough to make it, she’d call me at the designated time and we’d have a chat,” she remembers. But it was her husband who really kept her afloat. “We’d go to bed holding hands and we’d wake up in the morning still holding hands.”

Catherine was referred to Dr Cindy Mak and started chemotherapy. Her first treatment was at Gloucester House at the Royal Prince Alfred Hospital on the same day that Gail O’Brien and Tony Abbott were opening Lifehouse. She had trouble getting through as the media had blocked the roads off.

Also on the same day, she was presented with an award for her contribution to the performing arts at Sydney Town Hall. “It was a surreal experience,” she says. “It was my highest career point and it was my lowest personal point.”

Catherine’s second chemotherapy treatment was at Lifehouse in the first week of opening. She was impressed at the way Lifehouse valued patients’ privacy and dignity. “There was a big willingness to ask for and take on board feedback as it was the early days of the hospital. And I saw that feedback being put quickly into action. That really blew me away,” says Catherine.

On top of chemotherapy she had three surgeries and radiotherapy. Catherine doesn’t have her breasts anymore but says she feels free.

“I don’t wear prosthetics and have no desire to have a reconstruction. I don’t want to hide the physical toll the disease has taken.”

The hardest thing for Catherine about having breast cancer was knowing how to cope with life after treatment. She says: “Picking up the pieces of life was hard. I didn’t know how to feel. It was almost like having post-traumatic stress disorder. I went to a counsellor and she was a fantastic help.”

Catherine found relief in helping other people. The arts programs she runs give help and support to refugees, Aboriginal students and students from remote parts of the state. She also found she had a low threshold for negativity. “I walk away from negative conversations. I’ve isolated myself to a point and made my day very simple. I say no to things and just focus on being well,” she says.

She says it’s also important to keep her sense of humour. She remembers the day she came across an escaped water buffalo on King Street in Newtown with a smile. “One of them kicked the car, I looked out the window and there was a water buffalo. There were two giant water buffalo charging up King Street.” It turns out they’d escaped from a nearby film set.

These days, Catherine appreciates the here and now. “I think everything now is special, I’ve got no time to waste and I feel strong.”

Most of all she appreciates her daughter. “She was sixteen at the time I was diagnosed and it was so awful for her. She was wonderful and would clean the house and was so sensitive and caring. My main focus was being well for her and trying to show her how to pick yourself up and deal with whatever life throws at you.”